The world’s most urgent needs

We must agree that the most urgent calamity is the one which is taking more premature lives every year and has the highest cost. We must agree to unite to create the strength necessary to identify the most cost-effective solution to reduce cancer death and cost, and not be silenced by those who do not want to hear the truth about the ineffectiveness of current treatments. 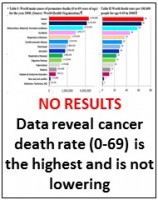 What follows demonstrates how it is possible to fulfill the dreams of those who want to make a difference, and how cancer patients and citizens, who now just accept their tax burden without seeing a return, will benefit from more lives saved and at a lower cost

Analyzing the first four causes of death: cancer, heart disease, malnutrition and accidents, one can determine that more premature deaths from cancer and malnutrition can be prevented than premature deaths due to heart disease and accidents. The reasons are the following: Irrefutable data demonstrate that early cancer detection can save lives in 90% to 98% of the cases while reducing at the same time cost because surgery for a one time small tumor removal is significantly cheaper and has a higher success rate than prolonged painful expensive chemotherapy treatments; to save a life from malnutrition, just  $0.33 per day per person is needed with a probability of success close to 100%; in contrast, cutting in half the number of premature deaths from heart disease is unlikely because its mortality has been already cut more than in half during the past 50 years and because we are not aware of new breakthroughs in this field; similarly there are no known solutions to halve deaths from accidents unless one invests huge sums of money to improve viability and educating drivers in the world.

These determinations lead us to conclude that among the top causes of premature deaths, we can have the highest impact in premature death reduction for cancer and malnutrition. Next, we must decide how to achieve these goals at a minimum cost; since we already know that early cancer detection saves lives and reduce cost (while expensive chemotherapy treatments did not change significantly the mortality rate during the past 50 years), money and lives could be saved by focusing on early cancer detection.

Let’s remember that we should look at premature cancer death and not TOTAL deaths. If for example 60% of the world population dies at 99 years of age from heart disease and 40% from influenza at 35 years of age (like three of my relatives who died 90 years ago from the Spanish flu) would you focus on curing heart disease or influenza? In fact, the problem of Spanish influenza was addressed when aiming to reduce premature mortality and has been almost completely resolved. At some point we all must die -one organ has to fail- but we need to focus on the organ (or disease) that fails at an age younger than a woman’s life expectancy of 80 and of 76 for a man.

Examples of these articles have also been printed by top cancer and health care organizations such as the American Cancer Society, National Cancer Institute, and World Health Organization: Figure 5  reports data published37 by The New York Times on April 24, 2009 which shows that cancer mortality was reduced by a mere 5% over the past 50 years, while in contrast, during the same period, heart disease mortality fell by 64%, stroke declined by 74% and flu and pneumonia by 58%. These data show that cancer mortality from 1975 to 2007 increased by 20%.