THE FLAWS: Crosetto had confirmed from leaders of international conferences, Program Managers from Government agencies, leaders at universities and research centers that “Research goals are defined by Industry”. Following are provided some facts and data. 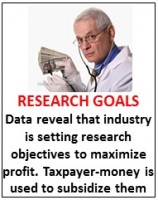 The current cancer industry is requesting to improve PET spatial and time resolution to the detriment of high sensitivity and low examination cost because their interest is to have some kind of support to sell their products (chemotherapy, radiotherapy, medical imaging devices).

A tumor shrinking as a result of taking a drug is intuitively good news for patients, as well as exciting news and a selling point for the pharmaceutical company that owns the drug. This is one of the key endpoints, or goals in clinical trials. The drug company, the clinical trial system and all cancer businesses are eager to get proof of the slightest shrinkage of a tumor by measuring it to the highest possible precision.  Even the minutest measurable decrease is something to brag about. Therefore, it is understandable why they are interested in and now pushing for funding instrumentation (directly or by exercising pressure on government agencies to allocate money for such devices) that can show the slightest change in size when using their drug and why they ask the developer of any instrumentation, based on any measuring technique, just to provide a high spatial resolution to distinguish any small change in size.

While we can understand their desire for asking to measure a parameter that increases their sales and to provide money to scientists, the fault lies with scientists who should provide their ethical and professional knowledge of which measuring technique is more suitable to accurately measure this parameter without putting patients’ health and lives at risk.

You would not go to City Hall to pay your water bill with detailed photos of your indoor plumbing, nor would you ask the water meter manufacturer to improve their meters so you can measure more accurately the size of your indoor pipes. They would immediately respond that you are trying to use the wrong instrument and would advise a caliper to measure the dimensions.

Should you insist on they improve the water meter so you can better measure the size of all pipes, engineers and/or physicists should explain to you how a water meter works: the basic operating principle consists of a wheel that turns by the flow of the water providing you a number related to the turns of the wheel.  Although there could be a way to relate the size of your indoor pipes with the flow of the water, measuring dimensions with the water meter would be subject to many errors and engineers would make it clear that there are other measuring techniques more suitable to measure that parameter (dimensions of pipes).

Should a drug company insist on asking for an improvement of PET devices that would more accurately measure the size of the tumor, engineers and/or physicists should explain to them how the technology works. Positron Emission Technology works by tracking anomalies in biological processes by capturing and counting, within the unit of time, signals from tumor markers and providing a number related to the biological activity of the tumor. Is it a benign tumor, dormant, or is it very active? For example, because cancer cells take up to 70 times more nutrient than normal cells, glucose molecules are tagged with a radioisotope (positron). The combination of nutrient and radioisotope is called tumor marker, which is emitting signals that are detected by PET devices. Counting the signals emitted from the tumor markers within the unit of time provides the information if the tumor is benign, dormant or very active.

Although there could be a way to relate the size of a tumor measuring the “x”, “y”, “z” coordinates of signals captured, that could be used to measure tumor dimensions with PET, this would be subject to many errors, and engineers should make it clear that other measuring techniques are more suitable to measure that parameter (tumor dimensions). Here is a more detailed explanation of the errors: The positron travels a distance of 1.4 mm (FDG) to 13.8 mm (Rubidium-82) before encountering an electron and emitting two photons in almost opposite directions. The instrumentation called PET is detecting these two photons which clearly cannot provide the precise spatial information of the original tumor marker because it cannot know in which direction the positron travelled the distance of 1.4 mm (or 13.8 mm), and then there is the additional error of the photon angle that is not 180 degrees. This should clarify why PET developers and manufacturers should focus on capturing as many photons as possible rather than improving spatial resolution because intrinsic errors will always exist which cannot be eliminated due to these natural phenomena.

Scientists, physicists and engineers are responsible for approving or rejecting requests from doctors and the cancer business.

For each parameter there is an appropriate instrument that can measure it, and scientists, physicists and engineers have an ethical duty to provide professional information about the measuring technique of an instrument if they realize someone intends to use an improper one to measure a parameter. They have an ethical duty to protect the consumer from commercial advertisement that is in the interest of the profit from their sale rather than to benefit the consumer. For example, a scale can accurately measure weight and not body fat because it does not have accurate information on how hydrated you are, when you last ate, exercised, if your feet are calloused or dirty, etc. The goal of gaining more profit from the sale of scales is achieved by expending effort toward the measurements of body fat with the wrong instrumentation. Similarly the goal of gaining more profit from the cancer business and from the sale of chemotherapy drugs is achieved by expending effort toward the measurement of tumor dimension with the wrong instrument (PET).

Physicists and Engineers should explain to doctors and cancer businesses how Positron Emission Technology (PET), invented 60 years ago, works, and which parameters can be improved to provide information that is not now available to doctors and that they could not even think would be possible to have. This additional information will greatly help them in their diagnosis and prognosis. It will also avoid physicists from having to explain improper upgrades and use of PET (which should be called “degrades” when it lowers the sensitivity and increases cost), as one would explain that a wrench should not be used to drive nails and a hammer should not be used to loosen bolts.

Ideally a PET should be very sensitive, very efficient (efficiency is defined as the number of good signals captured divided by the number of signals emitted by the tumor marker) and detect within a unit of time, all possible signals from the tumor markers at the lowest cost per good signal captured in order not to jeopardize the patient’s safety, health and economic burden.

Less efficient devices need higher doses of radiation, cannot find small tumors and have a higher examination cost. The signals from the tumor markers are providing information relative to an abnormal biological process which indicates the presence of the mutation of normal cells into cancerous cells.

How can the PET instrument measure the dimension of the smallest tumor if it only has the capability of capturing one signal out of 10,000 emitted by the tumor markers? After understanding how PET technology works, doctors would realize the absurdity of requesting physicists and engineers of PET to improve the capability of measuring tumor dimensions more accurately to the detriment of sensitivity and cost.  This would be just as absurd as the person asking to improve a water meter in order to more accurately measure the dimensions of the pipe system of their house.

If signals are not first captured, you do not have data to provide any measurement. The alternative to administer from 30 to 60 times the radiation dose to the patient, compared to what would be necessary with a more efficient 3D-CBS should not be acceptable by the ethic of a doctor because his patient, after a few PET examinations, will have a higher risk to be killed by the radiation than by the tumor. Furthermore, the current 5,000 PET devices have also shown not to be effective in reducing cancer deaths because it cannot find small tumors. The reason is because a 1 mm tumor will not generate enough signals showing anomalous biological processes in specific areas of the patient’s body. Current PET devices detecting only 1 out of 10,000 signals generated by the tumor markers, require a large tumor that will generate hundreds of thousands signals from tumor markers before a few are captured. Also the 1 mm resolution PET Module by Craig Levin will not be able to detect small tumors unless a radiation dose sixteen to 30 times the one accepted by the International Commission of Radiation Protection is administered to the patient, nullifying the whole purpose to save a patient’s life.

Although it is understandable that the desire of doctors, drug companies and the cancer business to know that a drug shrunk the tumor for example, from  ½” to ¼” at the end, it is not a localized tumor that kills people but it is the process of metastasis that kills the patient. The proof is that one of the best chemotherapy drugs, Avastin, that can shrink the tumor has proven for over ten years of data collections from those who used it that in average has only prolonged the life for 4.4 months and most of the patients were killed by the metastasis process and not by the localized tumor that shrunk.

Therefore it is essential to fund an ultrasensitive, low examination cost 3D-CBS technology that is detecting cancer in asymptomatic people and cancer survivors at an early stage when it is localized, and can be removed with surgery, burned with pin-pointed radiation or cured with drugs that have shown efficacy when used in early detection.

Crosetto has explained these flaws very clearly for more than a decade in books (e.g. 2005 “How to Win Cancer”), articles (e.g. 2008 article published by World Scientific “Astroparticle, Particle and Space Physics, Detector and Medical Applications”), at conferences (e.g. 2007 at the International Conference on Advanced Technology and Particle Physics –ICATPP), with seminars at hospitals (e.g. 2008 at Southwestern Medical Center in Dallas, Texas and at many other hospitals in Italy, Switzerland), and research centers (e.g. 2009 at Brookhaven National Laboratory which has been video recorded as well as for most of the other presentations).

However, the pressure from drug companies and cancer business on reviewers of articles and funding agencies to increase the sale of their products have prevail with respect to the ethic and honesty of those scientists and funding agencies who continue to assign millions of dollars in the direction of cancer research that is not reducing cancer deaths but is just increasing cancer costs.

The REMEDY would have been TRANSPARENCY in SCIENCE implementing open, public workshops where these scientists who are approving articles and funding for improving PET spatial and time resolution and reject articles and funding to PET projects with very high sensitivity and lower cost, are made accountable for the ethic of the position of responsibility they held and are requested to explain why during the past years they have supported the technology that increases the sales of drugs instead of supporting the interest of taxpayers who are paying their salaries by supporting what saves lives and reduces healthcare cost? They should also provide scientific evidence demonstrating how they are pursuing with their decisions the understanding of the laws of nature and the scientific truth for the benefit of humanity.

The REMEDY would have been TRANSPARENCY in SCIENCE implementing open, public workshops and accountability