I believe I would be failing in my duty if I did not draw your attention to the  adversities and obstacles  that I have faced this past decades that have delayed implementation of my invention capable of extracting ALL valuable information from radiation,  and the resulting burden to taxpayers this inaction has brought, not only monetarily but in avoidable deaths and suffering that will continue to occur unless immediate action is taken and the NRE (Non-Recurring Engineering) of the 3D-Flow and 3D-CBS projects are funded.

Crosetto is available to offer 80% of his patent licenses to philanthropists and/or investors who commit to using a percentage of the income generated  to pay for free cancer screening examinations to low income people. He is requesting a fair PUBLIC merit review  from funding agencies to compete for funding with other applications.

I hope that newspapers, radio, television and online media journalists as well as social networks feel a responsibility toward those who suffer and die needlessly and will reprint and disseminate this information and the linkhttp://blog.u2ec.org/wordpress/?page_id=88 to this proposal so that everyone, including funding agencies handling  taxpayer money or donations, will request a fair PUBLIC merit review that will reveal the scientific truth to benefit humanity.

Philanthropists and/or investors who are interested in making a difference in the world by funding this project and are willing to sign an NDA (Non-Disclosure Agreement) to verify the specific details of its implementation should contact UnitedToEndCancer@gmail.com.

The 3D-Flow OPRA breakthrough invention could be considered the third generation of electronic instruments, following the first generation invention, the Oscilloscope, which visualizes the constantly varying signal voltages characterizing signals from transducers, and the second generation invention, the Logic State Analyzer, which captures and displays multiple signals from a digital system showing timing relation, crosstalk, etc.

In 1992, I invented the 3D-Flow architecture, recognized valuable officially by world’s experts in the field from academia, industry and Research Centers (including a representative from CERN), in a formal international scientific review held at FERMILab on December 14, 1993. In 1994, I built a cylindrical 3D-Flow structure to accommodate the 3D-Flow chips, however the NRE to build the chip was never funded. Now, with the world changing from communicating with text to communicating with pictures through social media, the 3D-Flow OPRA instrument and device will be essential for solving target application problems of multidimensional Object Pattern Recognition in real time on data (identifying objects in frames or pictures) arriving in parallel from a matrix of thousands of transducers at ultra-high speed.

I proved the feasibility and functionality in hardware on two modular boards with 68 x 3D-Flow processors each, suitable to build 3D-Flow systems for matrices of transducers of any size, and have now for the first time detailed the design of all components needed to build 3D-Flow systems in two modular form factors: VXI boards 36.6 cm x 40 cm and VME boards 16 cm x 23.3 cm. Quotes to build all parts have been provided by reputable industries. To prove feasibility and competitiveness, I received two or three quotes from different companies for the construction of the same part.

The selling price of these systems will be determined by the market value set by the company commercializing the product. 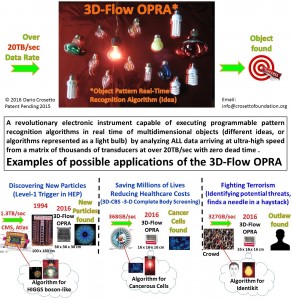