CERN-LHC must admit, 22 years after the invention of the 3D-Flow-OPRT, to having taken the wrong direction, wasting $50B

The cost of $50 billion spent on the LHC project during the past 20 years is calculated as follows: 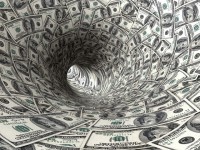 This is a conservative cost, which is most likely to be of the order of $60 billion when considering that LHC work was very active from 1990 as reported in the 3,000 pages (three volumes) of the Proceedings of the “Large Hadron Collider Workshop” held in Aachen on October 4-9, 1990 and the fact that several CERN documents state that there were over 10,000 professionals working on the LHC, rather than the 8,500 estimated in the $50 billion total cost. (For more details, see page 5, section 1.3.1 of the document in pdf version at: http://links.u2ec.com/doc2/809.pdf).

ADMISSION OF THE FLAWS AND THEIR REMEDIES BLATANTLY IGNORED FOR DECADES, DAMAGING TAXPAYERS

2.1  On the first inconsistency, a) capturing less than 100 of the 100,000 Higgs boson-like particles generated, b) CMS leader Sridhara Dasu’s admission in slide 51 of his seminar given 01/09/2013 that CMS experiment failed to provide detailed measurements and the need to acquire more data in 2015-2016, c) Theoretical physicist Savas Dimopoulos’ statement in the movie “Particle fever” that he is waiting for more detailed measurements before making a stronger statement regarding the identity of the new boson, confirm there is a problem with the alleged discovery.

How can CERN claim a discovery with instrumentations incapable of making detailed, accurate measurements after admitting the need to replace key parts of their detectors and the need to acquire more data in 2015-16?

In 2012, CERN admitted that the OPERA experiment which appeared to show neutrinos travelling faster than the speed of light was flawed when it was proven that OPERA instrumentation was incapable of making accurate measurements. In 2010, why weren’t the LHC team who fixed the problems that melted 50 magnets in 2008 and who proved it could run at 3.5 TeV, awarded the Nobel Prize?

2.1.1  THE FLAWS: The flaws causing this waste of time and money were ADMITTED by the same authors of the CMS and Atlas experiments who claimed the discovery of the Higgs boson-like particle.

2.1.1.1  The front page of the CMS Technical Designed Report for the Level-1 Trigger Upgrade published on August 1, 2013, ISBN 978-92-9083-390-1 CERN-LHCC-2013-011, states: “To meet these requirements the electronics for the calorimeter, muon and global trigger systems will be replaced. The upgraded trigger system is planned to be available for CMS data taking from the start of the 2016 LHC run.” If it needs to be replaced, then this is ADMITTING it is flawed. On page 3 of the same document they are ADMITTING the limits of the current Level-1 trigger system, stating: “… a large increase in flexibility beyond that provided by the current trigger system.”

2.1.1.2  Leaders of the main experiments at CERN, during their presentation at the 2013 IEEE-NSS conference, ADMITTED that their tools were inadequate to make accurate measurements and needed to be replaced. e.g. Atlas L1 Trigger states in slide 16: “no change to the detector is needed. Full replacement of front-end and back-end electronics” was needed instead. This was not because of aging radiation limits but actual limitations of the current Atlas trigger, which they ADMITTED. When A. Puig, the speaker who presented LHCb results, was questioned about the low efficiency of LHCb in capturing hadron which he presented in slide 6, he ADMITTED that the capability of executing a complex algorithm at the L0-Trigger (which is equivalent to L-1 trigger in other experiments) would have improved the low 50% efficiency of the Hadron’s trigger.

2.1.2  THE REMEDY: That the 3D-Flow-OPRT would have remedied these inadequacies by accurately measuring all characteristics of the new particles in a cost-effective way, was admitted in several letters from top leaders in the field and by those who spoke against it in the past. Despite the 3D-Flow-OPRT having passed several public international scientific reviews, and its feasibility and functionality being proven in hardware, it has been ignored for 22 years by influential scientists who are handling taxpayer money. Now, CERN is about the make the same mistake again when it decided to adopt the lower preforming and costly FPGA-OPRT.

2.1.2.1  The same document CMS Technical Designed Report for the Level-1 Trigger Upgrade, published August 1, 2013, on page 13, first paragraph of Section 2.2.1 clearly states that the “trigger threshold” (TT) technique used in the current detector cannot provide those detailed measurements and agrees that THE REMEDY is to replace the Level-1 Trigger with the capability to execute “object identification algorithms” (OPRT). The major scientific review held at FERMILab in 1993, recognized that the 3D-Flow-OPRT invention was a REMEDY to the traditional, limited Threshold-Technique (TT) Level-1 Trigger because it gave a more powerful tool to experimenters who could execute Object Pattern Recognition Algorithms (OPRT) in a programmable way at Level-1 Trigger. The reviewers stated in their final report that the 3D-Flow is a “unique concept” and that “experimenters would probably think clever uses not now possible”. The 3D-Flow concept was proven feasible and functional in hardware and was presented at the 2001 and 2003 IEEE-NSS conferences. Even Wesley Smith, who in 1993 was the only leader in the field who disagreed that programmability was needed at the Level-1 Trigger, recanted the claims he had made in 1993 in a meeting with Crosetto at CERN on August 27, 2008.

2.1.2.2  At the 2013 IEEE-NSS-MIC-RTSD conference, leaders of the Atlas experiment at the presentation N5-4: “ATLAS Upgrades…” on slide 16 state the need for a “full replacement of front-end and back-end electronics”. These leaders were aware from 1993 that the 3D-Flow was a REMEDY to the problems they faced when they began acquiring data in 2010. For example, in 1993, former Atlas Deputy Spokesman Andy Lankford was asked by SSC Director to write the charges to the reviewers who would review Crosetto’s 3D-Flow invention in December 1993. One of the reviewers has been a leader at CERN Atlas experiment for the past 20 years. On August 27, 2008, Crosetto met Nick Ellis, leader of the Atlas Trigger for many years (e.g. in 1992 they compared their different approaches at the Conference “Computing in High Energy Physics” in Annecy), asking if the 3D-Flow technology-independent, flexible, modular, programmable, and capable of executing object, pattern recognition algorithms at Level-1 Trigger (OPRT) could have satisfied the Level-1 Trigger requirements of all current modern experiments. He agreed it would have been a REMEDY for all their challenging problems. Perhaps A. Puig, who presented the low 50% efficiency of the LHCb Hadron’s trigger at the 2013 IEEE-NSS Conference, was unaware that in 1999 the LHCb 3D-Flow base-line Level-0 Trigger had the capability of summing 3 x 3, 4 x 4, etc. cells, could identify the shape of objects (OPRT) in a programmable form and would have been the REMEDY for the low efficiency he described. However, it was replaced with the old approach, a less efficient hardwired trigger proposed by Orsay and Bologna and used in HERA-B experiments that identifies clusters summing only 2 x 2 cells and compares with the threshold (TT), as stated on page 105 of LHCb official document, CERN-LHCC 98-4. The choice to adopt a less efficient trigger and their statement “…gives only a small loss of energy…” on page 105 of the CERN-LHCC 98-4 document, in regard to the 2×2 vs. 3×3 cluster, TT vs. OPRT, with no programmability proved they were wrong and that they wasted time and money. If they really want to improve efficiency, they need to replace their LHCb Level-0 Trigger (which is equivalent to Level-1 Trigger in other experiments) with the 3D-Flow-OPRT trigger which they failed to implement in 1999. The reason for the poor choice of replacement of the Level-0 Trigger in 1999 was because funding was not assigned to the project/approach/invention that had more scientific merit and could be identified through TRANSPARENCY in SCIENCE.  Instead, funding was assigned, and in most cases still is assigned, to those who have more power in handling tax money.