Priority Question for written answer to the European Commission

Following the activity by the Crosetto Foundation for the Reduction in Cancer Deaths on May 27-28, 2015, in front of the building of the European Commission in Brussels that raised the issue in the press of the need for TRANSPARENCY in SCIENCE and in the assignment of funds for research, particularly in cancer, a member of the European Parliament on May 29, 2015 filed a formal Priority Question to the European Commission with the request of a written answer. It was received on June 4, 2015, published on the European Union website in English on June 11, 2015, with the Protocol Number P-009063/2015. Published in 24 languages on June 16, 2015. 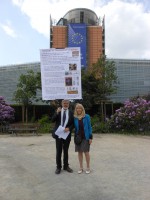 In the wake of no less than 15 years of discussions the Competitiveness Council decided at its latest meeting to postpone the implementation review of the European Research Area until 2016 and announced that a further EUR 500 million had been secured to finance new scientific projects. Some stakeholders, however, have expressed criticism and say that they are perplexed about the apparent slowness and secrecy of proceedings concerning research at European level. Major economic interests are said to be involved, and it is also allegedly the case that large amounts of EU funding have been allocated to research but the public have not been properly informed about the outcome.

1. Will the Commission investigate and explain the mismatch that reportedly exists between the colossal public funds being used to finance research into existing cancer prevention systems and the results achieved, which are apparently considered to be negligible and inadequate?

2. Will it embark on new initiatives with a view to improving transparency and information regarding the selection criteria used for public financing of all scientific and research activities in Europe, taking into account the entire procedure, that is to say, from the time of granting EU contributions up to the demonstration stage and the point at which the ultimate findings are disseminated to the public?

From: MOSCA Alessia Maria
Sent: Thursday, June 4, 2015 9:30 AM
To: ‘crosetto@att.net’
Cc: ‘info@crosettofoundation.com’
Subject: For your information: a priority written question to the European Commission

I followed in the press the issue you raised, last week here in Brussels, about the lack of transparency in the allocation of European funds for research, particularly in cancer.

Because I share your fundamental concerns having already raised similar concerns on other occasions, I have decided to present a priority written question to the European Commission on the subject.

You will find it attached for your information.

Member of the European Parliament