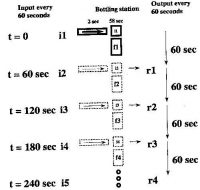 On behalf of the 7000 people who signed a petition, the 1600 Americans dying every day from cancer (one every 4 seconds in the world), I respectfully request you call for a public ANALYTICAL and SCIENTIFIC discussion of my 413-page invention to solve the cancer dilemma through an effective early detection between myself, the DOE and NIH-NCI experts responsible for spending taxpayer money to advance science, significantly reduce cancer deaths and healthcare costs.

I am providing an explanation in a multi-step process delivered in this and future messages (9 in total) of the analytical process I used with 12-18 year-olds to improve the efficiency and cost-effectiveness of a water bottling analogy. I used a similar analytical process regarding efficiency and cost-effectiveness in my 413-page invention and now I am respectfully requesting the same analytical thinking and discussion with experts of my inventions which can save 33% of cancer deaths in 6 years, 50% in 10 years, realistically saving over 13 million lives in 30 years and reducing cancer healthcare costs by over 50%.

Fifteen years before receiving the letter from you on September 25, 2015, stating that you are confident you “can give scientists, innovators, and technologists the tools they need to think analytically”, I implemented analytical thinking with Middle School students of a Dallas Montessori school by optimizing a process to increase the speed of a multi-step process without requiring an increase in the speed of any one phase of that process. Future messages on “Inventions Part #?” detail the analytical reasoning of each successive approach to solve the problem, gaining system performance at each approach.

The bottling analogy problem is to find the most efficient and cost-effective way to fill bottles with 2 liters of water where each takes 30 seconds to fill.  The goal is to fill a bottle every 6 seconds, providing the possibility to fill larger bottles at a higher rate.

The cancer problem is to find the most efficient and cost-effective way to reduce cancer deaths and costs.

In this specific case the task is to extract all valuable information from radiation by capturing and accurately measure all signals from tumor markers at the lowest cost for each valid signal captured. As for the bottling water analogy we are challenged by data requiring processing time longer than the interval between two consecutive input data set. The proposal is to build three 3D-CBS (3-D Complete Body Screening) units, 400 times more efficient than current PET, requiring 1/100 the current radiation dose, and screen for cancer with a single 4-minute examination covering all organs of the body, 10,000 people per device per year in the age group 55 to 74 taken form three different locations where, in the previous 20 years, the mortality rate has been constant.

Based on the increased efficiency of the 3D-CBS device, provided by my 3D-Flow OPRA (Object Pattern Real-Time Recognition Algorithms) technology and based on the analytical and scientific evidence of my inventions described in the 413-page proposal, whose feasibility are supported by 59 quotes from several reputable companies, a 33% reduction of cancer deaths is expected 6 years from funding, and 50% in ten years. The staggering increase in efficiency of the 3D-CBS technology, besides providing a cost reduction of the examination because of a higher throughput and lower radiation dose, it further improves cost-effectiveness by providing an effective replacement of several cancer screening exams (mammogram, colonoscopy, PSA, PAP-Test, etc.).

***** Beginning of the analytical thinking with 12-18 year-olds students about the results from approach #1: One bottle filled every 60 seconds *****

Solution #1 for the bottling analogy: the first sequential approach takes 18 seconds to prepare each bottle, 30 seconds to fill them with water and 12 seconds to dry and label them; a total of one bottle every 60 seconds.

This solution’s result is ten times slower than the 6-second goal.

Students reported their analytical thinking on page 37 of book ISBN 0-9702897-1-5, noting the very low throughput and the water flow not being used to full capacity because for 30 of the 60 seconds workers are performing other tasks; however, a plus is the very low number of employees.

Their analysis led them to Solution #2.

This email was sent first to: