HUGS & DIALOGUE FOR JUSTICE: For a world of reason, compassion, where everyone respects each other, where science and progress leads to all men’s happiness 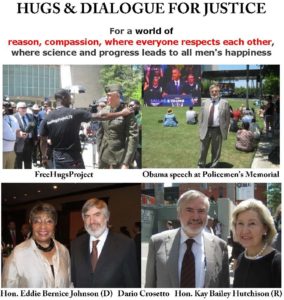 Today I went (Dario Crosetto bio & serving the community) to pay my respects to the five policemen killed Thursday July 7, 2016, after the peaceful Black Lives Matter-organized protest to draw attention to the tragic events that occurred a few days earlier in Baton Rouge, Louisiana, and Falcon Heights, Minnesota.

The public were not allowed in the Meyerson Auditorium where the ceremony took place in the presence of friends and family, religious leaders, police officers, politicians, including President Obama and his wife, Vice-President Joe Biden and his wife, President George Bush and his wife…

However, a huge screen in the park adjacent to the auditorium displayed the entire ceremony, although from the photos you will notice there were not so many people (video of the park with a few people). I followed the ceremony on the screen and then went to the exit of the Meyerson where a group of people were receiving senior executives with signs mostly of love and a desire to solve the problem with understanding. There was just one protest sign.

A black man distributing “FREE HUGS” as you can see in the upper left corner of the photo made headlines and was broadcast on the news in the evening (hugs video). A “hug” in this climate of anger, protests of black victims from white policemen and vice versa, is certainly the first important step, but as for all the other inconsistencies and injustices in the world, the hug, the opening of the heart, must be followed by a DIALOGUE that implements justice, reason, compassion and respect for others.

If we do not eliminate the inconsistencies and injustices with a DIALOGUE, the HUG will lose its meaning for many people and they may feel betrayed, making the problem worse instead of solving it.

A dialogue makes emerge or highlights inconsistencies and injustices that if not addressed and eliminated remain for a long time not only as an insult to human intelligence but also to the compassion that each of us perceives as human dignity for himself and for others.

Cats eat fish and mice, dogs eat meat, man eats meat, fish, vegetables, and inevitably everyone kills another form of animal or plant life to survive; however, “compassion” is understood even by dogs, cats, pandas, birds, etc., who cannot express it in words, as shown in this video (video of compassion in helping other creatures).

In order to grow in culture, in well-being and enjoy our happiness and the happiness of our neighbor, we need to address the inconsistencies and injustices through dialogue among ourselves, in families, in neighborhoods, in small groups of our community or city.

In my city of DeSoto, we have the program “DeSoto Dining and Dialogue” (DDD) of which I am a member of the Board of Directors that prepares the program, the themes of the debates on racial issues or other interests of the community, and organizes events.

Since 2006, DDD organized two or three events a year in which six to ten families provide their homes and prepare a dinner for about 10 guests who are making the reservation at the City of DeSoto. At my house last April I had 17 people as you can read on the front page article in the local newspaper.

A facilitator asks questions that raise a discussion about the current issues among the diners. For the autumn event we had thought to ask questions about how citizens wanted to use the revenue from additional tax revenues due to the increased value of homes and as a result the city has more money ‘to spend.

However, after this dramatic event, we decided to move the next October event forward to August and have a meeting on July 25, 2016, to prepare questions regarding this issue.

There are several topics to be discussed that will make emerge inconsistencies in the Nation that need to be addressed also in my hometown of DeSoto with 50,000 inhabitants of which 70% are black, 23% are white and 7% are listed as other. When I arrived in 1991 the racial divide was 76% blacks, 21% whites and 3% other.

Here are a few inconsistencies related to the many shooting in public places in the U.S:

Why it is easier to buy an assault machine gun, rifle or pistol without having to show any document than the difficulties and verifications and many checks that one has to go through to be able to vote. The CNN video opens your eyes about it.

To purchase a drug at the pharmacy, a doctor’s prescription is needed.

To buy a bottle of wine or a pack of cigarettes, one must show a photo ID.

To drive a car you have to take courses, pass exams to obtain a driver’s license., etc. etc…

But any drunken, crazy person can buy an assault machine gun, rifle or pistol without having to show any documents, not even say his name.

To reduce crime, would it be advisable for all citizens to be vigilant and report unusual behavior to the police?

To reduce tension and give confidence to the citizens would it be useful to hire a greater number of black policemen, strengthen police tools to reduce their risk, protect them from false accusations with cameras, but if a cop is wrong, punish him with an exemplary punishment, to increase confidence in the citizens who must feel protected by the police?

These and other questions can stir a debate in preparation for the DDD event.

At the exit of the executives from the Meyerson Auditorium, I recognized Former U.S. Senator Kay Bailey Hutchison (pictured below right) of the Republican Party who as a Senator had written a letter in 2001 (see copy of the letter) in support of my life-saving inventions for early cancer detection that were scientifically recognized advantageous and to try to eliminate the inconsistencies of the enormity of the money spent in the fight against cancer and the poor results obtained in the reduction of cancer deaths. I updated her about this problem which shows the same inconsistencies as 15 years ago in the lack of transparency in assigning taxpayer and donation money to research projects.

Because cancer is a non-partisan, non-political global problem as it affects us all, I am addressing anyone who care about solving this problem.

In the past, The Honorable Eddie Bernice Johnson (see lower left in the photo), U.S. Representative  for the Democratic Party, sought to bring the attention to my invention/project for an effective lifesaving early cancer detection described in my technical-scientific book and in several articles to government agencies who allocate taxpayer money for research projects.

However, she was not able to have the government agencies implement transparency in science, by following the same scientific procedures in an open, public examination of my 3D-CBS invention as had happened previously with my 3D-Flow invention 90 minute presentation/examination in the auditorium of the Fermi National Laboratory in Chicago in front of hundreds of scientists. The examination at FERMILAB was continued with meetings which lasted a full day and my invention was recognized valuable in a written report. The review panel recommended the allocation of all funds available during the closure of the Supercollider to document my invention to a level that could have been reopened and funded to completion when funds would become available. However, when funds became available, other less efficient and more costly projects were funded.

Unfortunately, 15 years later this inconsistency remains and despite all official statements that government agencies are funding the projects with highest potential to reduce cancer deaths and cost, including from President Obama who stated that NIH funds “the biggest bang for taxpayer dollars…,”  we have scientific evidence that the procedure is denied that analyzes analytically projects based on calculations and scientific evidence.

Recently, I established communication with different entities that should carry out transparency in scientific procedures to use taxpayer money to fund research projects, but they show a refusal for transparency, instead covering up the interests of a circle of corrupt scientists who anonymously evaluate scientific projects meeting behind closed doors to split tax dollars among their circle of friends.