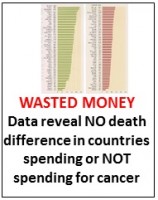 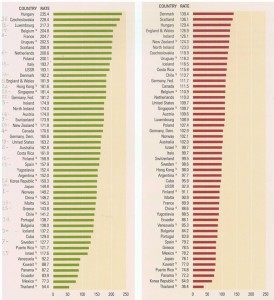 Figure  – Data demonstrate that money used to fight cancer is wasted. The figure shows cancer mortality rates in the world for every 100,000 people. Source: World Health Organization (WHO), American Cancer Society, National Cancer Institute. See the pencil numbers on the left indicating the most industrialized countries listed below which are spending $856/year per person that are not located at the bottom of the graph, thus demonstrating that money is wasted.

A.1.1  Reduce the wasteful spending on cancer that does not produce results: Global Economic Cost of Cancer is $1.4 trillion per year.

The $1.4 trillion/year Global Economic Cost of Cancer was calculated based on the Livestrong and American Cancer Society (ACS) report dated June 2010. On page 8 of the LiveStrong-ACS report5, cancer shows a global economic cost of $895 billion/year. On page 2 of the same report it states: “The total economic impact of premature death and disability from cancer worldwide was $895 billion in 2008. This figure represents 1.5 percent of the world’s gross domestic product (GDP). …This analysis did not include direct cancer medical costs, which would further increase the total economic cost caused by cancer”. This data can be found on page 3 of the 2010 ACS report[i] being $102.8 billion for the United States. (It also shows that cancer costs increased24 100 times during the past 50 years). We can estimate this additional direct cancer medical cost in Europe to be $160 billion, Japan’s at $55 billion, and for all other countries to be $200 billion, making a total global economical cancer cost of $1.4 trillion/year.

A way of visualizing $1.4 trillion is to think of a stack of $100 bills that would be 1,150 miles high (or the distance from Dallas to Washington DC or from London to Cosenza, Italy), or spending $45,000 per second for one year. However, because of the increasing cost of cancer, next year you will have to spend $50,000 per second. See the figure below how economic loss from cancer compares to the top 15 Global Causes of Death as reported by LiveStrong and the ACS.

Figure – Economic loss from the Top 15 Global Causes of Death as reported by LiveStrong and the American Cancer Society. Cancer is the leading economic loss; if one adds direct medical cancer costs which are not included in this table, then the economic loss from cancer is even more staggering