Facts show that for more than 68 years it has been widely established as well as published in various scientific journals and popular magazines like National Geographic (See their October 1946 issue) that early cancer detection could save 50% of all cancer deaths.

Data from experimental results recorded by several Government Agencies (e.g. SEER) for several years have shown that the “lucky” ones who had cancer diagnosed at an early stage (fortunately for them, because there does not exist yet a low cost screening for an effective early cancer detection of all organs of the body) have a probability of 90% to 98% that their lives will be saved from the three big killers: prostate, breast and colon cancer, and 50% from the biggest killer, lung cancer. In spite of the huge investment in drugs, powerful and famous people continue to die, demonstrating that a solution has not yet been found regardless of the money available from patients. One of the best chemotherapy drugs, Avastin, in a 10 year study has shown to have prolonged life on average only 4.4 months at a cost to the recipient of over $10,000 per month.

Why would anyone continue doing the same thing, but expect a different result? (This is Albert Einstein’s definition of insanity). Wouldn’t you think that if the advertisements that we hear on TV and see in print media (see Figure) for the past 65 years (“it looks good…”,  “now we have the cure for cancer…”) were true, the power and money of famous and/or powerful people who have died of cancer would have bought themselves a few more years of life?

If decision makers have known for 65 years that early detection works, why hasn’t my 3D-CBS innovative technology received funding? Because of its 400 times efficiency improvement compared to the current 5,000 PET (or PET/CT), it is much safer and efficacious for early cancer detection. 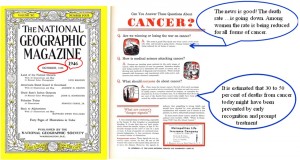 Articles do appear in prestigious journals and newspapers reporting the truth: that announcements of miracle cures are misleading as either they just prolong the life for a few months or they affect a very small percentage of a specific type of cancer, so that there would not be any significant change even if the cure were extended to a larger population.  They support experimental data that shows mortality rates have not decreased significantly over the past 50 years, and are the reason why famous and powerful people have been unable to extend their life by more than a few months using all the latest drugs, therapies, techniques, and “cures” that are advertised.