The Target Date to Reduce Cancer Death and Cost Continues to be Postponed
In 1937  leaders in the field claimed that if enough money could be provided, cancer would be eradicated.

Every time Decision Makers postpone the target date (after receiving and spending the money they requested), implicitly they admit a failure. 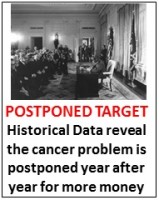 President Nixon essentially made the same claim when he signed the Health Care Act of 1971 “…signing this bill, the Congress is totally committed to provide the funds that are necessary, whatever is necessary, for the conquest of cancer” and continued when the NCI (National Cancer Institute) director promised a victory over cancer by 1976.

However, five years later no significant results in cancer death reduction could be reported and the target date was moved forward; this pattern of shifting the target date when the goal has not been met continues to this date.

Among the most recent declarations is the one in 2003, when the director of NCI issued a challenge “…to eliminate the suffering and death from cancer, and to do so by 2015”

but yet another declaration by WHO (World Health Organization) at the World Cancer Leader’s Summit on November 18, 2011, moved the target date to reduce cancer deaths by 25% to 2025.

Where is a concrete plan with all these declarations on HOW they can achieve the target?