Data reveal that many awards are not for scientific merit, but for deceiving the public

Is there a public misconception regarding the assignment of rewards for scientific achievements? 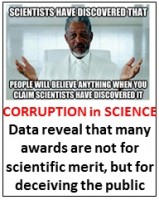 Yes, in many cases awards are detached from the merits the award claims and are used to deceive the public and/or to gain credibility from people who are seeking those showing competence in specific fields where they can to put their trust and/or money. The following lists some flaws and remedies in assigning awards after a thorough, fair procedure aimed toward identifying the highest merits in a specific field:

1.  THE FLAWS:Facts and documents prove that awards in science on many occasions are assigned for political reasons following an agenda other than scientific merit.

In 1998, U.S. President Bill Clinton awarded Michael Phelps the Enrico FERMI award “For his invention of Positron Emission Tomography” which instead was invented by a group of researchers at the General Massachusetts Hospital (GMH) when Phelps was 11 years old. Phelps spent his early life in a boxing career until the age of 19 when he was severely injured in an automobile accident which left him in a coma for several days. This illegitimate award helped Phelps gain credibility and deceived many into giving him donations and grants for projects not supported by scientific merit. Phelps’ entrepreneurial nature and his friendship with Alaskan Senator, Ted Stevens, who convinced the FDA and CMS to approve the PET scan reimbursement by Medicare, helped him create the CTI PET Company that sold for $1 billion to Siemens in 2005. CTI-PET devices have created a billion dollar market, yet they are based on the flawed “block detector” that poses severe limitations on PET efficiency.  They continue to contribute to the increasing cost of healthcare, exposing patients to high amounts of radiation without benefits of reducing cancer deaths and cost. Michael Phelps is now on the team of the EXPLORER project with other authors who for more than a decade have prevented Crosetto from presenting to conferences his ultrasensitive, low cost 3D-CBS invention targeted to early cancer detection and to open the door to new research studies in prognosis, therapy and development of new drugs.

The EXPLORER project, like the flawed “block detector”,  is not based on any innovations that can demonstrate a reduction in cancer deaths and cost. In fact, it has lower sensitivity and ten times the cost than the 3D-CBS invented 13 years earlier. If corruption is not eradicated, history will continue to repeat.

Corruption in science illegitimately assigned the award for inventing PET to Phelps when it had already been invented at GMH ten years before he finished his boxing career.

Corruption in science created a PET market that is not aimed at benefitting cancer patients and humanity and that does not check first its efficacy in cancer death and cost reduction on a sample population. The market was created because of the friendship between Phelps and Senator Ted Stevens who succeeded in convincing the FDA and CMS to reimburse PET examination costs and use the taxpayer money to benefit the cancer business.

Corruption in science stood in the way of identifying a more effective solution than the flawed invention of the PET “block detector” whose concept presented serious limitations to improving the performance of PET equipment even as technology advanced.

The above historical, undeniable facts are outrageous because they clearly demonstrate that the PET market was created to profit the few and not to benefit the many. These historical facts should teach us to make evaluations before funding research or starting a new market, and to look into the ethics of the scientist or leader who makes the proposal; an investigation should be conducted in the event of severe negligence or a breach of the code of ethics of some professionals.

When scientists are aware of how to best understand the laws of nature, understand what is best to advance science for the benefit of mankind, and yet deliberately obstruct, suppress and repress information and procedures that would benefit humanity, it is more than outrageous, not just a breach of the ethics of a scientist, and calls for a criminal investigation. These actions oppress taxpayers and humanity.

1.2  Crosetto made it clear on page 107 of his bookpublished in 2000, and in several articles and hundreds of seminars, that the invention of the “block detector” that claimed to increase the performance of PET was instead a concept that would seriously limit improving the performance of PET equipment with future advancements in technology. In 1992-93, Crosetto made it clear in several articles and seminars how his invention makes it possible to break the speed barrier in real-real time applications that would provide a powerful tool to discover any new particle and reduce the cost of HEP experiments. The technology was recognized valuable at a major scientific review and has been summarized in one page. These and several other innovations could have saved millions of dollars of taxpayer money and the lives of millions of people with the 3D-CBS effective early cancer detection device. Who knew which technology had more scientific merit yet deliberately obstructed, suppressed and repressed information that would have advanced science and benefitted humanity and saved lives? Wesley Smith, Peter Sharp, Joel Karp, Craig Levin, and many others should be accountable to humanity by responding to questions during a public investigation.  More recently, Ingrid Gregor, Adam Bernstein, Georges Elfakhri, Katia Parodi should be accountable to humanity by explaining why they are not only preventing the scientific community from being informed of Crosetto’s inventions, but are rejecting two workshops aimed at implementing transparency in science where scientists can discuss publicly their ideas/approaches/projects with one another so that the one having the highest potential to benefit humanity would emerge.

1.3  On October 21, 2008, CERN celebrated LHC success, after the failure of melting 50 magnets the month before and not detaining the record of the highest power in Accelerators in the world that was detained by the Tevantron Accelerator at FERMILab in the U.S. However. When LHC achieved results, surpassed the Tevatron, became the most powerful accelerator in the world was ignored and their leaders did not receive the Nobel Prize. Instead, CMS and Atlas experiments were mentioned in the 2013 Nobel Prize in Physics as successful, although they failed in 20 years to build a detector instrumentation capable of executing “object pattern recognition algorithm” that was invented 22 years before and therefore, could not capture most of the 100,000 new particlesCERN LHC. This enthusiasm ended nine days later when they melted 50 magnets, however, the champagne celebration continued with the delegation from 38 countries in the world. Perhaps those who built the Large Hadron Collider (Lynn Evans, Steve Myers, etc.) deserved the Nobel Prize in 2010 after demonstrating on March 30, 2010 that LHC reached the world record power of 3.5 TeV. Instead, the CMS and Atlas experiments were mentioned in the Noble Prize for Physics in 2013 after proving building detector instrumentations that did not have the capability to identify and measure new particles capturing only 100 candidates out of 100,000 boson like particles produced by LHC. Despite this failure of wasted time and money, there was no call for Aymar’s resignation, and plans for a big champagne celebration scheduled for a few weeks later in which delegates from 38 countries were to attend, continued. LHC restarted the activity reaching 3.5 TeV on March 30, 2010, and operated until February 11, 2013, when it was shut down for two years to upgrade its power to 6.5 TeV (still only 65% of its nominal power of 10 TeV, one third the SSC). The evidence of failure of the 50 melted LHC magnets on September 19, 2008, was turned into a celebration of success on October 21, 2008, with the participation of delegates from 38 countries. What could be better evidence of failure than 50 melted magnets, the disappearance of 7 tons of liquid helium, the blown away doors of the LHC tunnel, millions of dollars in damage, and a 14-month delay, etc.?